Having dinner with a friend last week and she pulled this treat out of the back of her liquor cabinet. She claimed it had been there for 10-20 year. (!!!?) I opened it and enjoyed it very much. 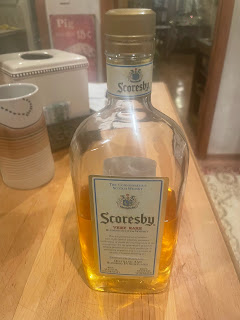 Scoresby Scotch Whiskey is a brand of Scotch whiskey that has been produced in Scotland since the early 19th century. It is made from malted barley, which is aged in oak casks for at least three years.
The whiskey has a smoky, peaty flavor with notes of caramel and spice. It is often enjoyed neat or on the rocks, but can also be used to make classic Scotch cocktails like the Rob Roy or Rusty Nail.
Scoresby Scotch Whiskey is a great choice for anyone looking for a smooth and flavorful whisky with a long history of quality production.
I enjoyed mine with just a couple of ice cubes.
Yum!